Share On GoogleShare On FacebookShare On Twitter
Home » The Unruly Ascetic » Day 101 Gongotri and beyond.
In the morning we jumped in yet another 4 wheel drive, having been arranged by a Danish trio on the way to Gongotri for a little sight seeing.  While the 4 wheel from Rishikesh was chosen as a 5 hour form of transport (as opposed to 7-8 on the bus), this 4 wheel was necessary and private, since the road to Gongotri was technically closed.  No buses running, no shared 4 wheel drives running.  We were lucky to get a cheap ride up, splitting it 5 ways, even if it meant not knowing exactly how we would get back down.

More on this later.

This driver, hired by westerners, was calm and relaxed, covering the 3 hour journey in about 3.5 with stops for photo taking and chai.  Since we had such a pleasant journey and early start, Megan and I decided to jump right into the hike (and since we had only a 2 day pass for a 3 day hike… bureaucracy!), we lept out of the truck practically before it stopped, heading for the trail. 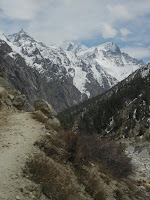 Mistake #1:  The hike to Bojbasa is 14 Kilometers. We didn’t actually know that anyone was at the closed Ashram.  Our original plan involved hiking in early enough that if no one was there, we could just hike back out, disappointed, but alive.

Over the course of the first kilometer (honestly, before we even got to the gates of the National Park), I began to wonder if tagging along on this adventure was the best idea I ever had.

Over the course of the next 10 kilometers, I became sure that tagging along on this adventure was not the best idea I ever had. 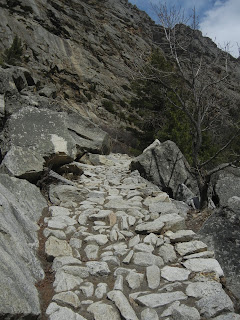 Having never backpacked before, never been at an elevation even close to 3000 m (remember, I was living AT sealevel for the last 2 years), and having spent the last month sitting in a Vipassana cell, on trains, and in restaurants in Rishikesh, I was not exactly physically prepared for the exertion.  As the day progressed and it got colder and darker I began to realize that I had to keep going, not because I wanted to see the glacier and because I didn’t want to let Megan down, but because it was already below freezing and I didn’t have a tent or a proper coat.

So I pushed on.
Usually anywhere from 100 meters to a full kilometer behind Megan.

I trudged up the hills and skirted the cliffs and carefully, carefully trekked through the land slides and snow falls that washed out the trail.  Whenever I would catch up with Megan she would cheerfully comment on how glad she was we didn’t hire a guide.  I just reminded myself not to look down.

At about 11 kilometers I lost sight of Megan.  I kept plugging along, stopping frequently to enjoy the views and shift my pack (and to swallow the cough that had started a couple hours earlier), reminding myself that Bojbasa had to be close.  Then I came to a fork in the road. And no Megan.  At any other sensitive point Megan had waited to tell me what to do.  But no Megan.  So, I went straight.  If I wasn’t meant to go the obvious way, she would have waited.

About a kilometer later I began to feel the drop in temperature as the sun threatened to go down, not just behind the mountains, but behind the horizon beyond.  I stopped at the top of a rise to catch my breath and found myself truly defeated at the sight of at least another km of trail.
And no Megan. 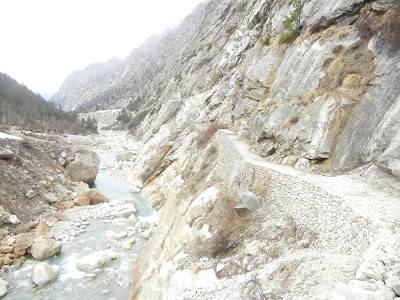 Wait…  It is already below freezing.  I am not sure I went the right way. Megan was so far ahead, or maybe she went the other way, or maybe she stepped 3 inches to far in one direction and plummeted to her death. Which leaves me alone. Without shelter. In the Himalayas.
I looked down and saw a footprint in the mud.  It could be Megan’s.  Or it could belong to the crazy German guy we met who hiked the whole thing the day before.  Either way, it hinted that I was moving in the right direction.

More trudging ensued.
A little mental discussion ending in “Vipassana ain’t got nothing on this shit” ensued.
I spent a good amount of time scoping out the rocks and hillside for a decent place to shelter from the wind during what promised to be a cold hard night.
And I thought little bit (and entirely without sarcasm or melodrama) that I might die.  That the path was closed for another month because it wasn’t considered safe.  That I had no outdoor survival skills, and that this was, in fact, my mother’s worst nightmare.
Screw motorbikes without helmets. 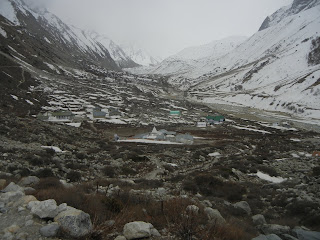 It was around this time that I came around a bend, praying for a flat stretch of land housing an empty ashram when I saw Megan, standing at the top of the next ridge, smiling broadly.  I think I shouted something about hating her and being terrified. But then I began to laugh with relief as I realized that she wasn’t wearing her pack, and she wouldn’t have taken it off unless we were there.  She assured me that she could see Bojbasa about a half a km away, and that she too had been scared and looking for some natural shelter along the way. 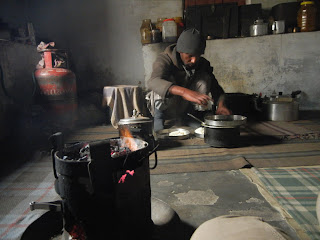 10 minutes later we hiked into the ashram, much to the surprise of the lone caretaker.  Naturally, in true Indian fashion, he brought us inside and made us tea.  The sun went down and darkness descended as we sipped the hot drinks, sitting in our sleeping bags, happy to be out of the wind, if not out of the cold.  While Megan and I were ready to sleep on the cement floor and shiver through the night, Parvesh insisted that “as guests” we must sleep in the only bed in the caretakers building.  He supplied us with extra blankets and even pillows (and a knife under my pillow… “is there danger here!?!  No madame, only me!” … but still the knife none the less.  Parvesh, our host, lives 5 months of the year alone at the ashram with no heat, electricity, or running water.

With a lot of laughter and satisfaction at being alive, relatively warm, and inside, eventually we slept.