Share On GoogleShare On FacebookShare On Twitter
Home » The Unruly Ascetic » Day 102: This is what we came for!
As dumb as it was to hike into the Himalayas without a guide or any confirmation that we could survive, it turned out to be a great call.

We were there about a month ahead of tourist season.  The temple in Gongorti, the literal “end of the line” for traveling by motorized vehicle, opens May 5 (or 6 or 7, depending who you ask), so the roads in the area are only just beginning to be repaired after monsoon season and a long winter.  The same goes for the trail to Gomuhk, except that by “just beginning” I mean “they haven’t really thought about starting.”
So no one with any real sense tries to go up there. Meaning, for about 14 km in one direction and who knows in all the others, it was Me, Megan, and Parvesh, who didn’t bother to venture far from his compound.

We woke in the morning feeling reasonably rested and surprisingly spry.  I was glad to find my struggles from the day before were not a result of muscular weakness so much as altitude sickness.  I felt strong in my legs and back, even if my lungs were clearly full of fluid (a little something we like to call pulmonary edema).  We started out on the last leg of our journey to the glacier as soon as the sun came over the mountains. 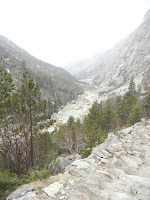 Again, I didn’t think I was going to make it.  My lungs and heart protested strongly, demanding that I give up on this ridiculous task.  But after about an hour of a walking meditation (right… left… right… left…) my body accepted that yes, this was going to happen again today, and it relented to the exertion with less protestation.

At 4 km we came upon the Gumukh temple (“temple” meaning hut with a bell and a sign to take off your “shose”).  Megan pointed to the glacier in the distance (which I had mistaken for grey rock) and proceeded to climb down toward the riverbed, past the “down go any further” sign and beyond the end of the trail. Naturally, I followed.  The going wasn’t so rough.  Rocky, but not too steep for the most part and we were able to travel allow pretty well without falling, sliding, or ending up in the river.  With a bit of genuine climbing toward the end (and very little fear after all the other stupid risks involved), we came around the bend in the river to face the glacier. 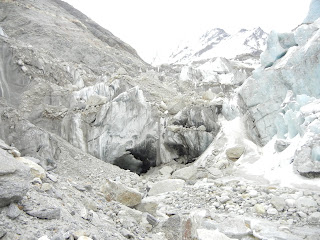 Tall, blue, dripping and glorious.
We stood in awe for a moments.
Then we danced and hopped around as much as the rocky terrain would allow for a couple minutes.
Then we took a bunch of photos and ate some crackers. 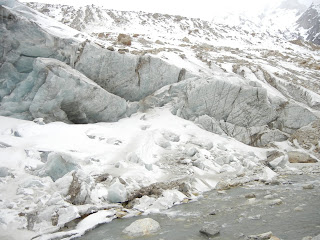 And by then we were cold. And I mean cold.  Shit, people, it’s a fucking glacier.  Granted it is melting and that is was the Ganga is, but still, it was cold up there and beginning to snow, and I was still wearing carhartts, a lulu sweatshirt and the shell of my raincoat.
So we basked in the glory of this phenomenon of frozen water.  Allowed ourselves to be amazed and swallowed into the immensity of this thing that has fed the most holy river in the world for centuries. Took a few more pictures. And then began the scramble back to the temple.  Then we began the trek back to Bojbasa.

Parvesh greeted us cheerfully at the ashram with tea and lunch (dhal and rice, deeelicious).  Our batteries having survived the trip to the glacier, we took photos of our host and his homestead.  Then we began the 14 km trek back. As mentioned, we had a 2 day pass for a 3 day hike.  After 45 minutes of rest, we hit the trail back to Gongotri.  Lucky for me, it is downhill on the way back!  This leg of the journey left a lot more room for enjoying the views and taking time to remind myself that I was hiking in the Himalayas.  That I am in India and that a week ago I was in the desert.  That I was wearing all of my clothes and a week before I would undress to my skivvies during each break in a 12 hour day of meditation. That is was snowing and I was in India with no one around for kilometers. 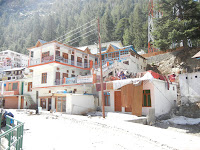 But 14 km is still 14 km, even if mostly downhill, and by the time we reached Gongotri we were ready for a little R and R.  As you may remember, though, Gongotri is closed.  For another month.  This does not mean the temple is locked up and restaurants have limited hours.  It means there is no electricity or running water and about 2 dozen guys working on buildings make up the entirety of the population.  Plus me. And Megan. Industrious as they are, the men of Gongotri found us lodging.  The boys painting a guest house on the river opened one of the rooms for us and toted water to our room up from the Ganga.  Even going so far as to heat one of the buckets of water and include us in their collective dinner. 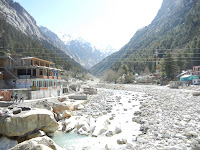 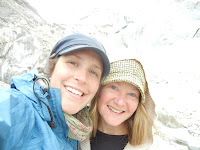 With a lot of laughter and satisfaction at being alive, relatively warm, and inside, eventually we slept.