Share On GoogleShare On FacebookShare On Twitter
Home » The Unruly Ascetic » Day 117: Delhi
Well, things don’t always (ever) turn out the way you (I) expect them to.  Maybe we should learn from this and give up expecting.  I think that I am beginning to be able to do this.  I had planned to go to Mumbai, but I seem to be the only person in India whose waitlisted train tickets don’t get confirmed.  But it is always a result of the universe looking out for me. I am happy to be in Delhi, the one city that so many people told me not to bother with. 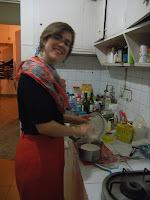 First of all, those naysayers are not friends with Laura and Hillary.  Granted I wasn’t either, when I showed up, but I am now (at least I really like them and they let me hang out with them).  It is so refreshing to get to hang out in a proper apartment, with little things like a kitchen and internet.  It has also been wonderful to have 4 extra days. Plenty of time to sleep in, practice late, and lazily decide what outing to go on each day.  Leaving room to cancel the plans I produced for myself to tag along with Laura and Hillary as they go about their expat business (which includes shopping for shoes and visiting a sweet step well that I otherwise wouldn’t have heard about).

So, as it turns out, Delhi is great!

If someone tells you not to go to Delhi because it is crowded and busy and dirty, tell them to shut it.  They’re right. It is crowded and busy and dirty, but come on, we’re in India (in our hypothetical telling-someone-to-shut-it situation).  Like most cities, Delhi varies.  You will be walking through a nice, relatively clean neighborhood one minute (with bodegas and dentist’s offices) and then next minute you are on a major highway lined by rows of makeshift huts. But, again, this is India.  You go from reasonably clean and affluent to depressingly filthy and pitiable within a few moments. 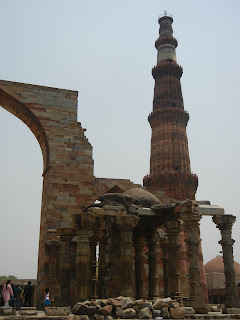 What Delhi has in abundance that I haven’t seen as much of in other cities is ruins and parks. often in combination.  Nowhere else have I had so many opportunities to stroll through a beautifully manicured park and stumble upon thousand year old mosques and the ruins of tombs and minarets built by ancient kings. fantastic!  Not only do I love beautifully manicured parks, but I like to pretend I remember some of the classical Indian history I studied in college and can appreciate the ruins. Anyway, makes for good pictures. 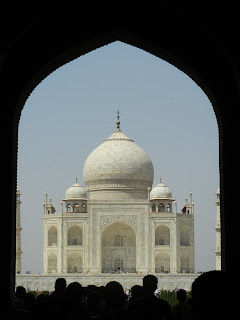 So, in Delhi, I have visited the world’s biggest Mosque and India’s tallest Minaret.  I have walked through what is said to be the best garden in Asia (according to Lonely Planet, and they’re never wrong) and strolled through a genuine village lodged in the middle of India’s capital.  I had a picnic with friends while we listened to devotional chanting.
oh, and I took a day train to see the Taj Mahal, (where I had my photo taken by EVERY Indian person in the complex).
I also got what I am relatively sure was an entirely genuine marriage proposal.