If you ever come to India (when you come to India), it is important that you travel some leg of your journey by train. I have come to feel that this is a necessary rite of passage.  If a sleeper car journey is possible, then that is the way to go.  You may be tempted to take the 1st class sleeper.  Lucky for me and Megan, we were not aware of this as an option.  3rd class, baby, ghetto India style. 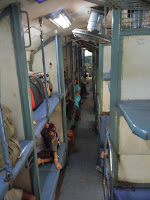 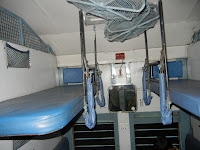 So, we left Gokulam at about 9:00 pm on Friday night, heading to the train station will ALL of our luggage and our two bendy bodies piled (much to the driver’s dismay) in the back of one rickshaw (“no madam, 2 rickshaws”).  When we arrived at the train station we had our first experience of Indian train culture… if you ask anyone any questions, they will act like you are mentally disabled and wave generally in the direction of the track while giving you the head bobble, saying “train coming, you go.”  They will not, under any circumstances do anything other than this.  No matter what you ask.  No matter how many times you ask.
What, are you retarded?  Apparently, we are.
But trains are simple, they tend to have labels, so we managed to get onto the first train and to our seats without event.  We gawked at the sketchy sleeper seats/beds for a few minutes, somewhat alarmed, but mostly amused and thoroughly satisfied with ourselves for being so brave and worldly.  We whipped out the sheets (and stolen airline pillows) reserved for just this event and settled in. 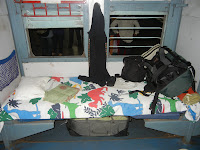 Note to reader: I can sleep anywhere. ANYWHERE. I slept like a champ.

The next morning we exited the train without event. Again, we were treated like moronic children for trying to inquire about the fact that Megan had a ticket for the next train, but I was on the “wait list.”  What, sir, does this mean?  Will I be able to get a seat?  “Train coming, you go!” So, Sir, we should both just get on the train? “Train coming!” (hand waving and head bobbing) “You go!”  Well, thanks so much for your help Sir, you have a nice day.

Needless to say, we had a little trouble this time.
This train only stops for about 65 seconds.  You have to know what you are doing.  We did not.  We asked someone who looked somewhat official what car to get on. He took our tickets and said (surprise, surprise), “You go!” and pointed to the entrance to the nearest car.  So, Megan started to put her larger piece of luggage through the door. and the train started to move.  Unable to lift her luggage alone (especially with the train inching its way down the track) Megan looked at the guy standing in the entrance (who was watching attentively, looking amused) and yelled “HELP ME!”  This, apparently, people respond to.  He grabbed her luggage, swung it only the train, grabbed mine, and then I grabbed Megan as we pulled ourselves up.
Now, the ticket inspector (the self same man who directed us into this car) asks for our papers and I am convinced that he is about to kick me off a moving train for not having a proper ticket.  This is not the problem, though.  Why, retarded westerners, did you get on the 6th car!? Clearly your tickets are for the 11th car.  (Too bad we didn’t try to ask someone for clarification. oh wait, we did. as you may remember, “train coming, you go!”)  Okay, so at the next stop, get OFF the train, go down to the 11th car and get back on.  Problem: the train only stops for 65 seconds, and that’s like 200 yards away. and we have a lot of luggage.  No problem, Madam, you go… and thus begins our attempt to drag 2 backpacks and 2 pieces of rolling luggage through 6 overly crowded train cars in India.
We made it through 3 on our own.
Long story short(ish), a kind (or sketchy…) young Indian man proceeded to carry my luggage to where he and his friends were sitting and instruct us to “sit here.”  Megan then went on a reconnaissance mission to the elusive 11th car while I stayed and talked American politics with this group of young Indian men (George Bush, your president?  Not my president, and he’s not the president any more. Barack Obama! Your president. Yes he is the president.  Very smart, Barack Obama?  Yes, he is very smart.  George Bush, not very smart?  No, George Bush is not very smart.)  Megan informed me, upon her return, that there is a sealed metal door between cars 10 and 11. and that when she looked out the side door, many heads were hanging out of the windows of the 11th car.  Our seats were on the ghetto car of the ghetto class of sleeper cars. in India. But!  no one is checking tickets anymore. and we are in India, where it’s more like guidelines than actual rules, anyway.  There was plenty of room in the next car, so we moved down another length of the train and found seats with some engineering students who were polite, but not particularly interested in us. Perfect. I proceeded to climb into the top bunk and sleep.

Note to ready: I can sleep all the time. ALL the TIME. 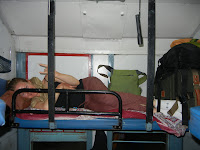 After too many hours, the train’s numbers started to dwindle, more space opened up and we move to lower, cooler bunks.  We sipped sugary chai and lamented our lack of food.  We had expected to be at purple valley by now and didn’t bring food (silly westerners, how did we not account for India time?)  Eventually the train pulled into the last stop and we emerged, somehow feeling sleepy (despite sleeping on and off for the last day) and seriously stiff.
At this point our luck shifted.
I was immediately approached by a shockingly polite and helpful cab driver who offered us a ride.  His price was fair, despite the fact that he didn’t actually know where we wanted to go.  Lucky for us, he was persistent when we tried to shake him off (for not knowing our destination).  We walked along the platform toward a large queue of people leaving the station.  He asked to see our tickets, then informed us that we had gotten off at the wrong stop.  We were in Vasco.  Our tickets were for Madgao.  Although we were closer to our final destination than we would have been, the transit authority would try to fine us.  500-600 rupees.  More than the cost of the tickets in the first place (but still only about $12).  No problem madame (head bobble), you walk down, I meet you.  So we walked… and walked… past the exits, past the offices, to the end of the platform… to a gate. that is open. our driver happily walked us though this unmanned, open gate to his car. No security or ticket check. Only in India.

About an hour and half later we arrived at the retreat center (this is why I say our luck “shifted,” instead of “changed.” I should have taken about 45 minutes).  It is beautiful.  It is like taking a deep inhalation when you didn’t realize you were holding your breath.
More on this later.